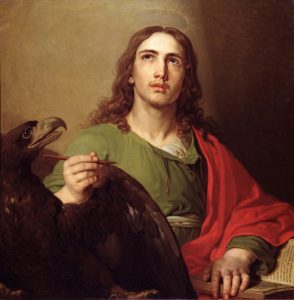 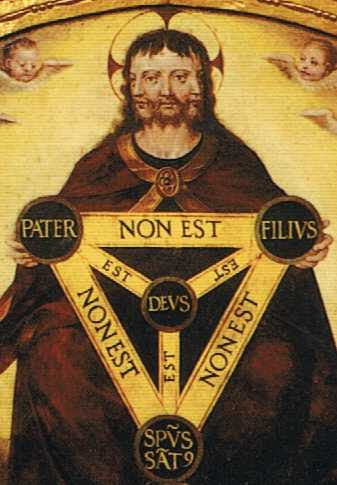 Today, I want to write down some ideas about the Trinity which I’m very alive to recently. This letter may leave a lot of threads hanging which I will pick up in future writing.

We affirm that the Godhead is composed of three Persons, which are one in substance – God, the Father Almighty; the Son, the Logos or Xristos Sother and the Holy Spirit or Pneuma Hagion.

Quite a lot of people experience some puzzlement over the presence of an affirmation of the doctrine of the Trinity in our core theological document. After four or five centuries of the dominance of rationalism, even many mainstream Christians think the Trinity an unnecessary, pre-modern, muddled, superstitious encumberance which we should ditch. Among the more staunchly monotheistic Abrahamic faiths, Judaism and Islam, it’s an impediment to dialogue as it is to any spiritual-but-not-religious person with a modern mind. Pagans are often bewildered by what can seem a “three but only three” approach to polytheism which seems unnecessarily restrictive. Buddhists often approach any kind of theism with a benign sort of puzzlement, but can experience a kind of symbolic affinity through the concept of the Trikaya.

Pastorally, this puzzlement is a gift for me. It lets me discuss the difference between the Church’s affirmation of a spiritual reality and any kind of mandatory statement of belief for an individual member. Since “freedom of thought” is another of our principles, that’s a very important conversation. The Church as a body agrees the Trinity is important, you personally are free to ignore it, should you wish. Many people do.

Most Gnostics adopt a kind of henotheistic Monism – many gods, one platonic Monad who reigns over all and unto which all things ultimately dissolve in their time. This is perfectly serviceable as a theological view – by which I mean I don’t regard that view as containing intrinsic errors which impede spiritual transformation.

Many Christians default to a sort of monotheism in which the Father is God, Jesus is a kind of Big Saint and the Holy Spirit is a sort of ambiguous spiritual gas (pun intended). Others to a sort of Jesus worship – really common in Evangelical communities and, increasingly in Catholic and even in some Orthodox communities. That last one seems a lot more problematic to me as a view, but I’ll forestall going further into that.

But really, all this is fine. These are all just views, none of this is Reality. All things dissolve in God in whom we live and move and have our being, so no harm done. Notice how minimal the Principle is, it makes no attempt to pin down “Person” or “substance” or the character of the Three, it just states a minimal version of the doctrine and says, “we think this is important”. Each of the views I’ve summarised above are perfectly fine responses to that, there are many other views, some orthodox, some heretical – I commend all of them to you.

That is one of the purposes of the Trinity – it’s a para-conceptual reality. None of these conceptualisations exhausts God’s reality as we are able to behold it or even as we are able to experience it. The Trinity is a paradox whose function is to wriggle in the mind’s grasp and, ultimately, to evade it.

To my personal way of understanding, the Trinity offers several things beyond that para-conceptuality. Its intrinsic relationality offers us a dynamism to the Divine living that breaks out of any static conception of God – a dynamism that is essential to a theology which puts human transformation at its core as our Johannite tradition does. Nothing is fixed in God, everything is in motion in Love.

OK. That’s all good, but it’s all just nice ideas. What effect does this have on you and me personally, in our lives? My experience is that the more you take Trinity seriously as a way to encounter God in Godself – not as a confusing philosophical abstraction, but as a living reality – the more you find it connecting with your life, and in particular your practice life.

Let me offer you one way I see it. Here’s a kind of narrative of the spiritual journey in terms of an encounter with the Trinitarian God.

One way to notice the Holy Spirit is as the Presence available in everyday life. She is as close my very breath. At my baptism, She became my companion, my comforter. At my confirmation, She and I became One Breath. As Her name implies, Her presence is subtle, like a breeze on the skin or the breath of a lover embracing you. Long before I began any kind of serious spiritual practice, even during the period I was an atheist this subtle Presence was about me, nudging me to take a certain path, putting people in my way, offering me books, ideas, even TV shows. She is Pronoia – the Divine Forethought – laying a trail before me back to never-distant place and a never-lost relationship.

As I began practice and even more as I entered seriously into our Johannite tradition, I began to move into an awareness of Christ, the Son, a radiant, loving Presence who faces me with total, human, openness and calls me to His arms. He appears to me in the face of the other – the stranger on the street, the friend with a kind word. He appears to me in the Eucharist – His royal Presence filling the temple as his throneroom, taking His seat among us His cherubim on the altar, His throne. There are moments when I lose myself in Him and my prayer becomes His eternal prayer – the only Prayer Which Is – the prayer of the Son to His Father. Perhaps this self I think I am is just a dream and I may wake up in the reality of His Being.

The saints tell us that the end of our journey is union with the Father – union with God as God is to Godself. The Ground of all Being. This end is not an experience, it is the Ground from which experience arises. It is union with what Christ Himself beholds.

… which is one of those things about which almost nothing sensible can be said, and yet almost an endless torrent of words have been expended. So I’ll leave that there.

The Trinity, I hope I have demonstrated, is not a pointless logical absurdity or a theological irrelevance. Among the reasons we insist on affirming it is that from the point of view of practice and spiritual transformation, this key paradox bridges the gap between what can be grasped conceptually and the encounter with God which can only be beheld. Gnosis, one might argue, consists in crossing this very bridge of noetic apprehension.

This is a recording of a workshop from AJC Conclave in 2012 exploring James Fowler’s developmental model of faith. I use Ken Wilber’s notion that any stage in the faith journey can become a station, at which a person stays for the remainder of their life.

James Fowler’s popular book “Stages of Faith” outlined for a general audience the results of a long-term study of how one’s faith – one’s holistic orientation to and relationship with the universe – develops through life. Fowler’s model of faith development provides a framework for guiding and companioning each other as our faith shifts and changes. This session outlines and explores Fowler’s model through a sequence of experiential exercises, drawing participants recalling and reflecting on their own journey of faith and that of the people around them.

A talk in Sydney about two books by Dr Mary Coloe which explore the deep patterns of symbolism in the Gospel of John.

The Gospel of John, according to Australian scholar Dr Mary Coloe, pivots on two key symbols: the Temple and the Household. The symbol of the Temple lays out a narrative through the Gospel explaining that God dwells amongst the members of the community. The symbol of the Household details the forming of the community as a kind of divine household. This session gives an overview of Dr Coloe’s theology of the Johannine community and reflects on its relevance for a Johannite church in the 21st century.